A leading Belgian daily paper "De Standaard" comments : " I was totally flummoxed by the tremendous richness, the confrontation of Celtic and classical playing styles, of Mozart and flamenco, of classical melancholy and brutal avant-gardism, of traditional singing and classical delivery. This simply has to be heard"
Other critics also adorned the suite with praise:
"This suite brings together in an intense but inassuming performance all qualities and emotions, transcending effortlessly all the usual clichés of different musical styles. The unexpected combination of sounds, rhytms and voices makes this concert thrilling, for both the audience and the performers." (Etcetera)
"A heartwarming encounter between musical cultures." (De Morgen)
"Hardly ever could a musical journey so enriching, contemporary and witty be heard in Flanders." (De Standaard) 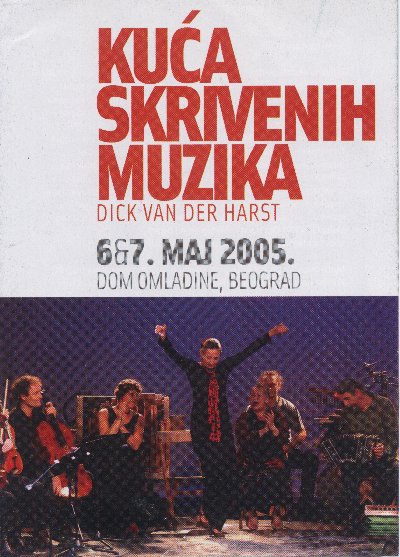 Although "La Casa de las Musiquillas Ocultas" originally was intended to be performed only once, the reactions of public, organizers and press were so overwhelming that the troupe ended up touring the cultural centers in Belgium, The Netherlands and France for almost five years.
One of many concerts in Vooruit in Ghent was recorded by national radio (Klara, the "classical" Radio-3-station) and later released as a live album.
The project came eventually to an end in May 2005 with two final concerts in Belgrade, one of which was broadcasted live by Serbian television.

Stopping however, wasn't such a good idea: unanimously egged on by musicians and public alike, Dick van der Harst wrote a sequel to this highly succesful musical feast.
With the arrival of Jean-Philippe Poncin on bass clarinet and Kim Delcour on bagpipes and flute, the total number of musicians on stage was brought to twenty five. Classical singer Els Van Laethem joined as well, alternating with her sister Katelijne from one concert to another.

Canvas (Belgian national television) had already filmed a "making of" documentary recounting the proceedings from the very first moment the musicians were confronted with Dick's newly composed music till the last minutes before the première. Now Belgian television also captured the concert at the Theatre in Leuven. Both recordings were broadcasted and have been compiled into a double DVD-box.
An impressive series of concerts followed, the last of which was performed in Reims on 6 november 2008...

"La Casa de las Musiquillas Ocultas" was a wonderful musical adventure in which lasting friendships were forged and that will be remembered with profound gratitude by all musicians involved.